Canadian Nicole Dextras is an environmental artist whose work stems out of her reflections on consumerism and its detrimental effects on nature. For part of her rich and varied artworks (from sculpture to installations, all realized with ephemeral materials) she uses fashion as a way of looking at and meditation about the human relationship with the natural world. Her series Iceshifts and Weedrobes give beautiful visual shape to her ideas.

Dextras‘s wintery Iceshifts series consists of garments frozen into blocks of ice. The final result seems to contradict the cold fixity of the freezing process. Dresses, scarves, socks and gloves brim with movement, as if they were dancing. 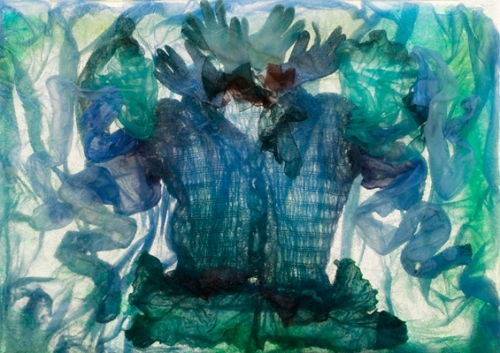 The photographic shoots capture the light passing through ice and fabrics. Transparency gives to these ethereal works a delicate lightness that suggests fragility but that also highlight the poetic beauty of ephemerality. The blocks resemble fossils, as if they were the remains of a consumeristic society based on fast use and early waste. 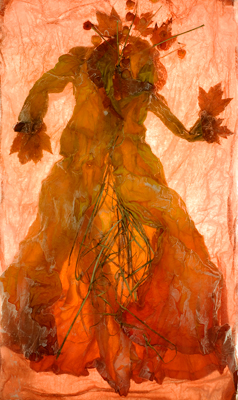 But with their lively and vibrant quality, these artworks suggest that there still life in them. Of course they will decay, just like ice melts and just like our biological life will end, but they’ll do so naturally, through changing stages rather than driven by any consumeristic urge.

For an environmental artist like Nicole Dextras, seasons are a very important elements, as we can already see from her Ice Typography and Green Words series. If the Iceshifts series can be defined as her winter excursion into fashion, her ongoing Weedrobes is the summer version. 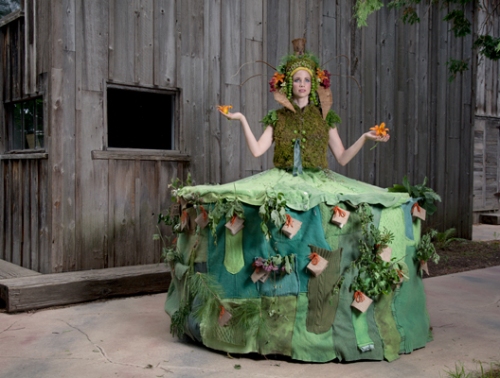 Each dress is made of plants, leaves, flowers and vegetables that are not only typical of the season but also grown and produced locally. In fact, Weedrobes is not only an experiment in fashion. It is a committed example of socially engaged art practice. 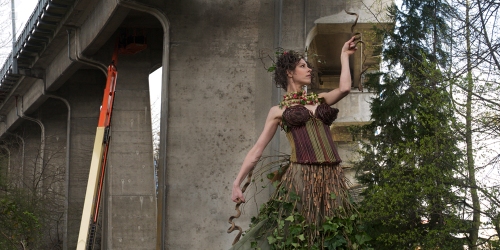 After realizing each sculptural dress, Dextras takes a picture of it in an urban landscape, as a way of representing the controversial relationship between nature and the altered-by-men environment. In a  third stage, people wearing the dresses engage with the customers in shopping areas, raising issues of ecology and eco-sustainability. Eventually, the Weedrobes will  decompose in a park or a garden, following the  natural cycle of life, that cycle that we should learn to peacefully accept and respect with our active choices, instead of constantly fighting against it in a ruthless race for a not very wise idea of wealth and progress. 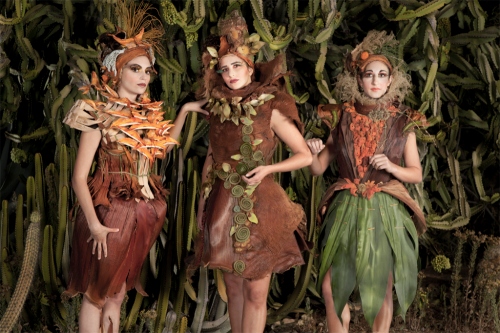 ‘Language is the garment of thought. The imagination weaves garments, visible bodies’ recites the homepage of Nicole Dextras‘s website that you can check for more of her amazingly imaginative language.

Courtesy of Nicole Dextras for the images.

4 responses to “Nicole Dextras: where fashion and environment meet”